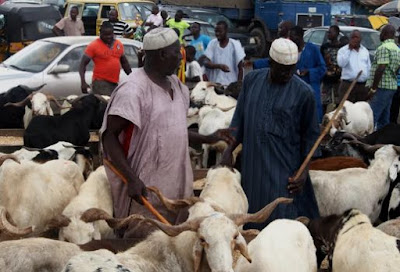 From all indications, Bleak Sallah awaits many Muslims across the country as the festival is holding a few days to a new academic session. Findings show that many Muslim parents have opted for low key Sallah celebrations, will prioritise their children’s education and payment of their tuition over merriment and the buying of rams.

Many of the Muslim faithful, who spoke to Punch, said they would be celebrating indoors with their families because of paucity of funds and hike in the prices of goods.

It is reported that the prices of some food items have increased by over 100 per cent as a bag of rice that was sold last year for N10,000 now costs N21,000.

A federal civil servant, Mr Tunji Adeniran said he would not buy rams for the festival because doing that would affect the payment of his children’s tuition.

He said, “We have not been paid salary for August and I have no money in reserve. But even if I get paid before Monday, I will use the money to pay for the school fees of my children who will be resuming next week.”

Another resident of Akure, Alhaji Muritala Olabisi said for the first time as a family man, he would not be buying rams for Sallah celebration.

He said, “I only intend to go to the Eid praying ground on that day and return home to my family.

“It is very unfortunate that we are experiencing a period like this; this has never happened to me before. Life is so tough for the people. The little money I have now cannot be spent on celebration. In few days from now, schools will resume and I have to pay my children’s school fees.”

In Lagos, the story is the same as many Muslims also lamented the effect of the economic situation on their finances.

A businessman, Alhaji Akanni Yusuf, who bought two rams for Sallah in 2015, said he would not be buying any this year.

Yusuf said his priority was paying his children’s tuition, which was over N350,000.

“By this time last year, I had bought two rams at the rate of N45,000 each, clothes for my children and the house had been stuffed with drinks, but I have decided not to buy anything because of the economic situation and my financial obligations.”
“My three daughters will be resuming school a week after Sallah. Their new tuition is N350,000. This is apart from books and other materials they will need,” he said.

Against the background of current economic challenges in Nigeria, many Muslim faithful in Katsina State said Sallah celebrations would be low key this year.

It was observed that many ram traders had relocated from the popular ram markets at Mayardua, Mashi, Dankama, Charanchi and Batsari to major streets in the city just to seek for more patronage.

However, despite their efforts, the ram traders said they were recording low sales.

One of them, Salisu Yesufu, said he sold average of two rams weekly, adding that many people have been complaining about paucity of funds.

A parent, who is a civil servant, Musa Funtua, said, “We cannot afford to buy any ram because of the situation in the country. But for Muslims, buying rams for Sallah is not compulsory and people should not borrow money to do so.”

In Kwara State, many Muslims also expressed concern that the Sallah celebrations would be bleak as a result of financial constraints and high prices of food items like rice, groundnut oil, etc.

A civil servant in the state, Alhaji Bolaji Ajibade, claimed that this year’s Sallah would be the worst that he would experience.

Another Muslim, Alhaji Muyideen Ishaq, said he had decided to kill two chickens to celebrate Sallah with his family since he could not afford to buy a ram.

The situation was not different at the Igbodu market in Warri South.

A Muslim cleric and a store owner at Igbudu market, Alhaji Musa Sadiq, said, “I know many people with numerous problems. Nigerians only feel the impact of government policies during celebrations. Prices of foodstuff have gone up. The non-payment of workers’ salaries has made things difficult for those of us celebrating.”

In Kaduna, the Ciroman Laduga in Kachia, Alhaji Ibrahim Bayero, lamented the effect the economic crisis will have on this year’s Sallah celebrations across the country.

Bayero noted that he used to buy a ram for his aged mother for Sallah, but regretted that he could not afford such luxury this year. He said, “There will be no celebration at all; the situation now really shows that people are suffering.”
Posted by dubem naija blog at 10:55 am