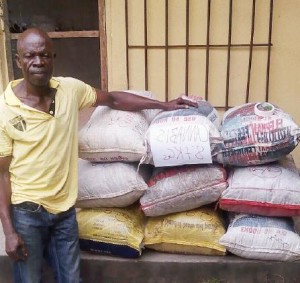 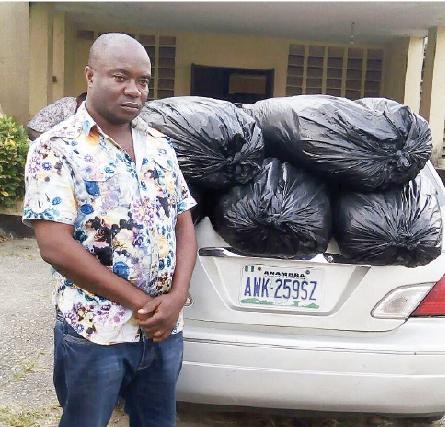 A raid by narcotics agents of the National Drug Law Enforcement Agency, has led to the discovery of 137kgs of cannabis and the arrest of two suspects in Abia State. The NDLEA commander in the state, Mr. Dele Akingbade, said the two suspects, 35-year-old Fidelis Ogbonna and 68-year-old Ududem Nwoke, were major hemp distributors in the state.
Akingbade said a cannabis warehouse run by Nwoke was discovered during the raid. It was there the NDLEA discovered nine bags of cannabis weighing 87kg.

Fidelis, a native of Aboh Mbaise Local Government Area of Imo State, said he is married with three children. He explained that he could not go beyond primary school level in his education and it has forced him to rely on the proceeds of the cannabis business to fend for his family.
“My father died when I was a little child and I have suffered. A friend introduced me to the cannabis business. I use the proceeds to take care of my family. I also use my personal car to distribute it to avoid suspicion,” he said.
Nwoke also gave a similar confession. He said he had been sustaining his family with cannabis proceeds.
The suspect, a native of Obowo Local Government Area of Imo State told investigators that he has no formal education and is married with two children.
“Cannabis sale is my only source of livelihood,” he said.
Officials told Saturday Punch that his son, who had been assisting his father in the cannabis trade, is currently on the run.
According to a statement by NDLEA spokesperson, Mr. Mitchell Ofoyeju, the suspects will soon be charged to court for unlawful possession and trafficking of cannabis contrary to Section 11 sub-section C and D of the NDLEA Act.

He quoted the acting Chairman of the agency, Mrs. Roli Bode-George, as expressing optimism that the agency’s anti-drug strategies would continue to yield positive results in the country. “These arrests and seizures are products of painstaking surveillance and the public should look forward to a systematic dismantling of drug trafficking cartels in the days ahead,” Bode-George said.
Posted by dubem naija blog at 2:21 pm