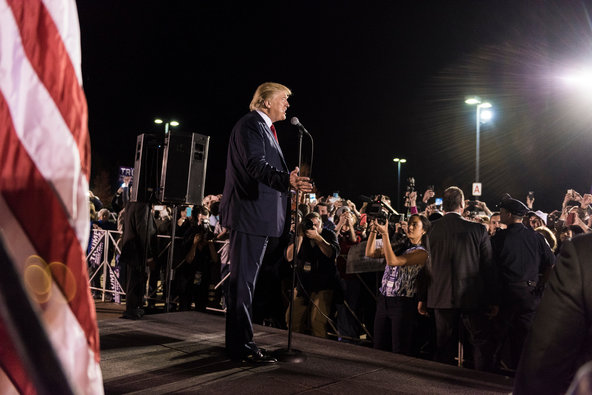 Donald J. Trump angered Hispanics when he referred to immigrants as criminals and rapists during the kickoff of his campaign in June. This week, he has put American Muslims on edge by suggesting that he would be open to shutting down mosques as president.

Asked on Fox Business Network if the United States should take action to close certain mosques as part of the fight against the Islamic State, as has happened in Britain, Mr. Trump said, “I would do that, absolutely.”

Mr. Trump then said that he was not sure about the legality of closing mosques, but that it was certainly something that should be looked at.

“It depends if the mosque is, you know, loaded for bear,” he said.

The Council of American-Islamic Relations, an advocacy group for Muslims, said on Wednesday that Mr. Trump was calling for an infringement on religious freedom.

“Donald Trump’s apparent willingness to close down American mosques that he deems ‘extreme’ is totally incompatible with the Constitution and our nation’s cherished principle of religious freedom,” said Robert McCaw, a government affairs manager for the group.

Mr. Trump drew criticism from Muslim groups last month when he did not rebut a supporter who said: “We have a problem in this country. It’s called Muslims.”
Muslims have taken offense to remarks from Mr. Trump and Ben Carson, one of his leading rivals for the nomination, who said he did not think a follower of Islam should be president.

For his part, Mr. Trump has said he is concerned about religious extremists, not Muslims generally.
“I love the Muslims,” he said in September. “I think they’re great people.”
Posted by dubem naija blog at 9:10 pm