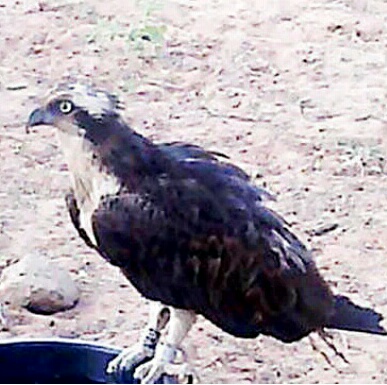 A bird from the Animal Research Centre, Germany, landed in the net of a fisherman in Zaria Kala-Kala, Koko-Besse Local Government Area of Kebbi State. Manager, State Livestock Investigation and Breading Centre, Dr Yakubu Dominic, while displaying the bird to journalists yesterday in Birnin Kebbi, said, “some days ago, a fisherman came to us with the bird that carries some identification mark which indicates that it may have flown to Nigeria from Germany. He got trapped in the fisherman’s net while trying to drink water”.
He said the bird was quarantined and samples taken have been sent to Vom for further investigation.

“The bird could be carrying the Bird-flu virus. That is why we quarantined it and sent blood sample to Vom,” Dominic said.

The manager added that the bird belongs to the Eagle family adding, “You know that they are carnivorous; they eat flesh. So, we feed it with fish or meat. We are not surprised that a bird flew in from Germany, because some time ago, we found a bird that flew in from Finland”.

He added: “We have contacted the German Embassy in Nigeria and we are still waiting for their reply. I am sure Germany will be happy to hear that we have one of its research birds in our custody. We have a global understanding on research and wellbeing of humans and animals”.

He called on people of the state not to consume strange animals seen on their farms or residence, but to report such discoveries to relevant authorities.
Posted by dubem naija blog at 3:07 pm