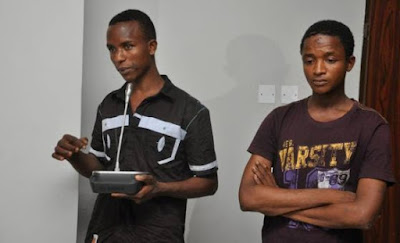 The Department of State Service (DSS) today paraded two suspected abductors of former secretary to the government of the federation, Chief Olu Falae, who was abducted at his farm in Ondo state on September 21st and released on September 24th after paying a ransom of N5 million.
Parading the suspects, Abdullahi Usman (aka Kadiri) and Babawuro Kato pictured above before newsmen in Abuja, an operative of the service, Abdullahi Garba, said that the suspects were arrested on Oct. 5 at J. Zebra hotel in Lokoja, Niger state.He said contrary to reports, the abductors were mere criminals and that the abduction was not about Olu Falae being a statesman and prominent Yoruba leader. Garba appealed to Nigerians to shun attempts by mischief makers to give the incident an ethnic coloration to cause disaffection among the populace.

“To this effect, this service wishes to appeal to all Nigerians to be law-abiding and responsible in their commentary on sensitive issues affecting national security.”

When interrogated, the suspects, who confessed to carrying out the crime with one Dantijo, who ran away with the N5 million ransom paid to secure Falae's freedom, said they hatched the plan to kidnap the elder statesman just before the Sallah holiday as they needed money to celebrate the Muslim holiday with loved ones.
Posted by dubem naija blog at 10:20 pm