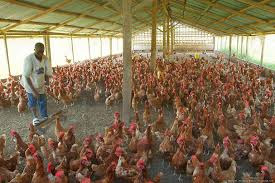 The Magistrate, Mr O. O. Olatunji, sentenced the convict to after he pleaded guilty to a two-count charge.

“You are hereby warned to desist from future-like offences as you may not be freed next time you involve in such act,” Olatunji said.

Lawal had pleaded for leniency and promised never to repeat the act.

Prosecutor Mary Ajiteru had told the court that the convict, who resides at Erikoro community in Ikorodu lives near the poultry.

He said that lawal stole six fowls from one Olayinka Adeyemi’s poultry and another eight fowls from one Bisi Ashimi’s poultry on Oct. 19. Ajiteru said the offence contravened Section 285 of the Criminal Code Laws of Lagos State, 2011.
The convict was handed a broom to sweep the court premises. (NAN)
Posted by dubem naija blog at 6:52 pm