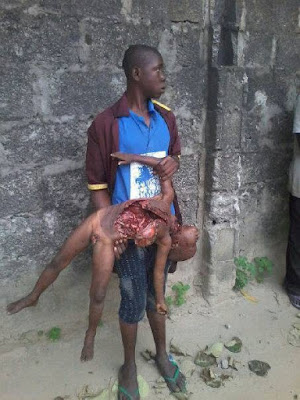 A 16-year-old boy, Tajudeen Azeez, has been arrested by the Lagos state police command for allegedly killing a four-year-old boy in Ijaniki area of the state.Azeez reportedly removed the deceased’s intestine and kidney after killing him.He was said to have lured the deceased to the back of an Anglican primary school, in the morning and committed the murder there, Daily Trust reports.

Giving his statement at the homicide section of the State Criminal Investigations Department (SCID), Yaba, where he is being detained, the suspect said one Osho promised to give him N50,000 if he could provide him with fresh human parts.

“At first, I did not want to succumb to the temptation but it kept coming. When I woke up this morning (Monday), I saw Ibrahim at the back of the house. I told him to escort me to a primary school not too far from the house. The name of the school is Anglican Primary School, Ijanikin.

“He followed me to the place and on arrival there, I stabbed him with a knife from behind. He fell down and I strangled him with a rope. I then cut his stomach open with the knife. I am sorry for what I did,” he said.

According to the acting police public relations officer for the Lagos Command, Patricia Amadin, the body of the deceased had been deposited at a government mortuary.

She said the suspect was arrested following intelligence information.

“Based on the strength of the information, the DPO and his men raced to the place. On arrival, they found the lifeless body of a four-year-old boy while the suspect was soaked in the deceased’s blood.

“From close observation, it was discovered that some vital organs such as the kidney and intestine had been removed from the deceased. All the organs were kept in a black nylon bag. The suspect was promptly arrested and taken to the station,” Amadin said.

She added that the police was making effort to arrest Osho, who is on the run.
Posted by dubem naija blog at 10:03 am