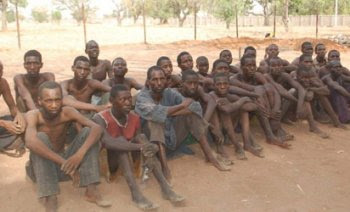 The suspects were assigned to various magistrate courts by the Chief Magistrate court One, Awaulu Musa Aliyu, for the continuation of the case and were later taken back into police custody.

"Some suspected to be members of terrorist gang known as Sara-Suka.We arrested some of them on the spot while committing the crime,while others were arrested based on complaints from the public”
Zubairu,warned criminals to repent now before it will be late for them stressing that security forces will continue to manhunt criminal elements in the state.

Kaduna State governor, Malam Nasir El-Rufai, had earlier declared war on miscreants who have been terrorising the state for long adding that any resident who commits murder or engages in any criminal act under any guise shall face the full wrath of the law without delay.
Posted by dubem naija blog at 8:01 am