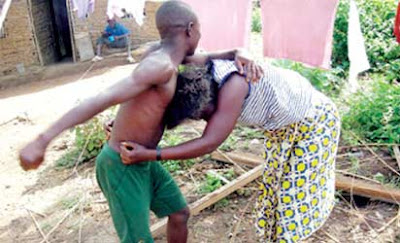 Silvester Okuku, 33, of Badawa Quarters in Kano has been sentenced to two months imprisonment by for beating one Comfort King. The accused was charged for criminal force, an offence which contravened Section 265 of the Penal Code.

Galadima told the court that Okuku used force on King and beat her up, as a result of which she sustained an injury on her face while he also broke her rubber bucket.

The accused pleaded guilty to the charge and the presiding magistrate Fatima Muhammad sentenced him to two months imprisonment or pay a fine of N7, 000 for the offence he committed.

She therefore ordered the accused to pay N700 to the complainant, as compensation for the bucket, failure of which the accused would be sentenced to three days imprisonment. The court told the accused that he had the right to appeal within 30 days.
Posted by dubem naija blog at 5:53 pm