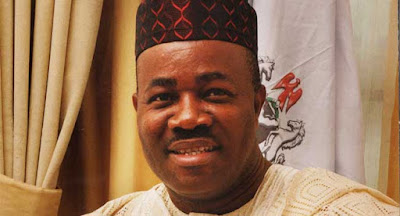 Godswill Akpabio, former governor of Akwa Ibom state and Peoples Democratic Party (PDP) senator (Akwa Ibom northwest), has been named the minority‎ leader of the senate. Akpabio was nominated by the south-south caucus of the PDP in the senate.

His nomination, however, is against the standing rules of the senate, which exempts first-term senators from holding principal positions. Last Wednesday, Gabriel Kolawole, justice of the federal high court, Abuja rejected an‎ application seeking to stop Bukola Saraki, senate president, from the naming Akpabio as minority leader of the senate.

But the court struck out their application, paving way for Akpabio’s nomination on Monday. The PDP, which lost the majority seat in the senate to the All Progressives Congress (APC) after the March general election,‎ had zoned the position of senate minority leader to the south-south.

Challenging the nomination of Akpabio, Kabiru Marafa (APC Zamfara central)‎, argued that it did not follow rules of the senate‎, and was therefore null and void. But Ike Ekweremadu, deputy senate president,‎ wondered why Marafa, who is a member of the APC, had made it his business to oppose the decision of the PDP, a party in which he has no stake.

Ekweremadu‎ further explained that although the senate rules give consideration to ranking senators for principal positions, the constitution of Nigeria, a superior document, does not exempt anyone from holding positions of leadership. ‎

He added that the decision of the PDP to make Akpabio its leader in the senate was strictly the business of the party. The senate president subsequently ruled Marafa out of order after, saying he was “crying more than the bereaved”.

Earlier, Marafa had also raised a point of order, saying that the activities of the senate since June 9, besides the‎ inauguration of the presiding officers, were null and void because they did not follow the rules of the senate. ‎He was also ruled out of order.