For stealing sugarcane, man gets 7 strokes of the cane as punishment 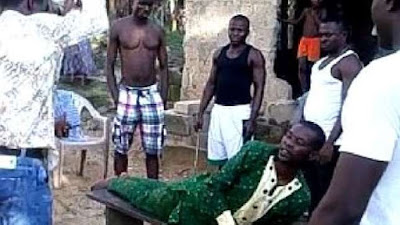 A hungry man who stole some sticks of sugarcane to assuage his hunger, was sentenced to seven strokes of the cane, as well as cleaning the premises of the court, by a Gudu Upper Area Court in the Federal Capital Territory (FCT).

Bona Urahi, who resides at Oroaga Street, Garki 2, Abuja, was dragged to the court by the police for entering the farm of one Joseph Christian, and stealing the canes and was caught in the act.

The prosecutor in the case, Mohammed Garba, told the judge, Alhaji Umar Kagarko, that Christian reported the case at the Garki Police Station on July 19.

Garba said that Urahi entered the complainant’s farm located at Garki 2 and cut down his sugarcane but was arrested while taking the sugarcane out of the farm.

According to the prosecutor, investigations into the matter revealed that it was the second time the accused had stolen sugar cane from the complainant’s farm. Urahi pleaded guilty and begged for leniency, saying his action was caused by hunger.
Posted by dubem naija blog at 8:46 pm