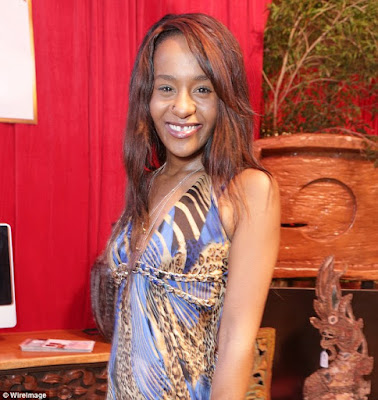 Bobbi Kristina Brown has died aged 22, six months after she was found unconscious in a bathtub. The aspiring singer was rushed to hospital and placed in a medically-induced coma on January 31 after she was discovered face-down in the water-filled tub at her townhouse in Roswell, Georgia.

She was later transferred to Peachtree Christian Hospice, where her distraught family and loved ones maintained a bedside vigil and eventually said their goodbyes as her condition deteriorated.
She passed away, surrounded by her family, at the hospice on Sunday, just three years after her famous mother, singer Whitney Houston, died aged 48 in a bathtub at a hotel in Beverly Hills.

According to TMZ, officials are planning to treat the death of Bobbi Kristina, who was found in the tub with bruises on her face and body, swollen lips and a missing tooth, as a murder investigation.
The first person of interest in the case will reportedly be her boyfriend, Nick Gordon.
On Sunday night, Gordon., who was banned from visiting his girlfriend by the Brown and Houston families was said to be 'out of control with regret and sadness' after learning of her death.

'Nick is on suicide watch. He keeps saying that if only [Bobbi Kristina] had heard his voice, things would have been different. She may have lived,' an anonymous source told HollywoodLife.com.
The Houston family said in a statement that Bobbi Kristina who was the sole heir to her late mother's fortune, estimated to be a huge $20million 'is now finally at peace in the arms of God.'
In a statement via a representative, they said: 'Bobbi Kristina Brown passed away July, 26 2015, surrounded by her family.

She is finally at peace in the arms of God. We want to again thank everyone for their tremendous amount of love and support during these last few months.' Meanwhile, Bobbi Kristina's father, Bobby Brown, was said by a relative on his side of the family to be 'very emotional' about his daughter's death - but to know 'that [she] is in a better place now'.
Posted by dubem naija blog at 6:35 am