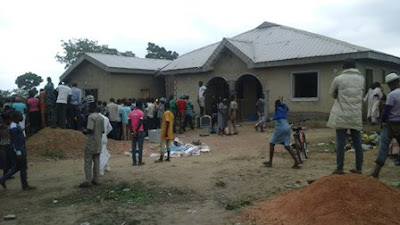 Anxiety and confusion enveloped the rustic Inuosegba community in Abeokuta as residents discovered items suspected to be severed human wrist, school pupils’ bags and uniforms in a locked building while searching for a missing 18 months old baby.

The 18 months baby identified as Hezekiah Opeyemi Ogundele was taken to a naming ceremony at Inuosegba community around 4pm on Sunday by his brother but while the ceremony was to commence, the baby was discovered to have disappeared mysteriously.

The Nation gathered that the naming ceremony was put on hold indefinitely while apprehensive guests and residents began to comb surrounding bushes and home, searching for the baby.

The mother of the baby, 26 years old Fashion designer, Elizabeth Ogundele, said her elder sister gave birth and was preparing to the naming when it was discovered that her son had disappeared.

In the course of the search, they discovered that a building near the venue of naming, severed wrist and school children’s items were found in a suspicious building within the neighbourhood, forcing the residents to place the property under surveilance as there was no one inside at the time.

The Nation gathered that later in the day, a commercial motorcycle operator visited the building in the wee hour and was arrested and handed over to the Police at the Lafenwa Divisional Police Headquarters, Abeokuta.

The Nation visited the building believed to be owned by one Chief Olasile Ifayemi, about 26 years old young man, and witnessed vandalising the over seven room bungalow and desecrated his shrine inside and over a dozen pots of fetish objects.