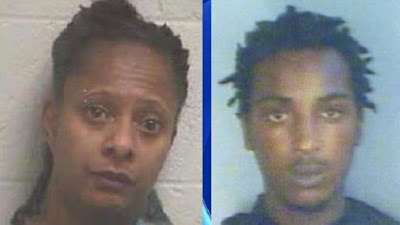 A 41-year-old woman, Karlita Desean Phillips and her 17-year-old boyfriend, Tavirous Dequan Settles, has been charged and sentenced after being arrested for the murder of her brother-in-law, instead of her husband, reports Metro UK.

Phillips of South Carolina, had mandated Settles to murder her estranged husband but in a case of mistaken identity, Settles managed to kill 31-year-old Jamil Phillips, her husband's younger brother.
Prosecutor David Stumbo said that Phillips was sentenced after she was convicted of accessory before the fact of murder and soliciting a minor to commit a felony.

Settles told the court that he and Karlita were in a sexual relationship and that she hired him to kill her estranged husband.
Posted by dubem naija blog at 9:41 pm