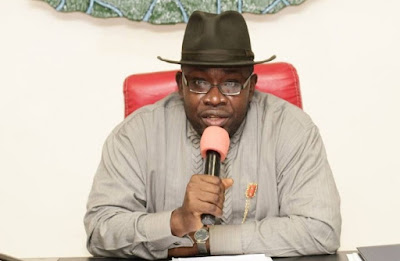 The leadership crisis rocking the Peoples Democratic Party (PDP) may have taken a new dimension as the chairman of the party’s Reconciliation committee and Bayelsa state governor, Hon. Seriake Dickson, has taken on the chairman of the National Caretaker Committee, Senator Ahmed Makarfi, accusing of frustrating peace efforts. This is as the National Chairman of the embattled Peoples Democratic Party (PDP), Senator Ali Modu Sheriff, has assured that he was not prepared to abandon the ship presently passing through troubled waters.

Dickson said Senator Makarfi is trying to act as an undertaker working on how to decimate the opposition. Senator Makarfi had earlier accused Dickson going against the resolution reached between ex-president Goodluck Jonathan and the PDP governors by joining Senator Ali Modu Sheriff to push for national convention in June.

The former Kaduna governor while stating his case against Governor Dickson said he had agreed with him that the report of the reconciliation committee be tabled before the governor’s and other organs of the party for consideration before making it public but that Dickson reneged and went ahead to proclaim the June date for convention.

However, while responding, Dickson who spoke on a national radio programme said what Senator Makarfi and others with him were trying to do was to ensure that the PDP was dismembered so that they take many of the membership to form a new party.

He advised that Makarfi should accept the verdict of the Appeal Court and work with the leaders of the party to bring about lasting peace. A group in the party, the Northern Elders Forum had last Thursday canvassed for a genuine reconciliation process to be initiated, with appropriate representations from each of the recognised Organs and Forum in the Party”.
The group said that those that are to be on the peace panel should include, the Forum of Founders/Elders, Board of Trustees, Current Governors Forum, National Assembly Caucus and Former Governors Forum.

Sheriff said Friday in Agbor, Delta State, when he made a brief stopover at the country home of the Acting National Deputy Chairman of the PDP, Dr. Cairo Ojougboh, that he would not abandon the party in its trying times.

The party chairman said that he was on his way from Owerri, Imo State, to attend the funeral of the former governor of Midwest (later Bendel), Dr. Samuel Ogbemudia, and decided to stop over at Ojuogboh’s residence to share a meal with him.

Fielding questions from newsmen, Sheriff dismissed any suggestion that he should resign or step aside as national chairman of the party in the interest of peace and reconciliation.
He likened such suggestion to asking a pilot of an aircraft to jump out of the airplane while there was trouble or asking a captain to come out of a ship wading through troubled wasters, saying that would be tantamount to calling for a definite shipwreck.

On suggestion that he stepped down as party chairman, the two-term governor of Borno State said, “There is no aircraft without a captain; there is no ship without a party. Anybody that tells the captain of a ship to go down wants the ship to capsize. We don’t want PDP to capsize. PDP will always get their leaders through a democratic electioneering process.

“I want the PDP to be at peace, the very man who is talking of resignation today, even if I resign will not so that he can destroy the PDP.
Posted by dubem naija blog at 10:06 am