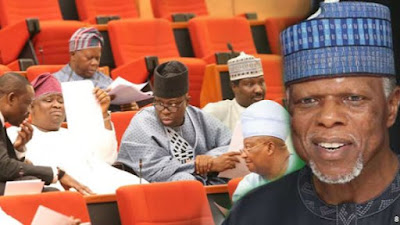 Human rights lawyer, Mr. Femi Falana (SAN), has stated categorically that Senate lacks the power to compel Hameed Ali to wear Customs uniform. Falana said there was no law stipulating that the Comptroller-General of Customs must wear the Nigerian Custom Service’s uniform. He added that, although Ali was the Comptroller-General of Customs, the retired military officer was not a member of the service.

Speaking with Punch, Falana said, “With respect to the customs service, its officers are required to wear uniforms. But since the CGC is not a serving customs officer the senate lacks the vires to force him to wear any uniform.

“The suit challenging the legal validity of Col. Hameed Ali’s appointment has been dismissed on the ground that the President has the power to appoint a non-customs officer to head the customs service. Since the court has held that he is not a customs officer, Col. Ali cannot be made to wear any uniform.

“I challenge the Senate to refer to any law that supports the wearing of uniform by the head of customs service, who is not a serving customs officer.”

Falana added that customs officers are not being made to wear uniforms in other countries including South Africa.

He said, “In many countries, including South Africa, customs officers do not wear uniforms.

“In Nigeria they wear uniforms because under the defunct military junta security agencies claimed that they were either military or paramilitary forces. It was part of the intimidation of the civilian population.”
Posted by dubem naija blog at 8:58 pm