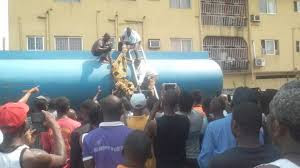 The Director of Lagos State Fire Service, Mr Rasak Fadipe, on Tuesday said they recovered two bodies from a petrol tanker and a deep well on Monday in the state. He said on Tuesday that an unidentified man, who attempted to steal petrol inside a stationary tanker, was suffocated by the fumes and died.
He said, “The tanker was parked opposite Morogbo Police Station, along the Badagry Expressway. The dead man was removed at about 5pm on Monday and was handed over to Morogbo police men.”

In another development, the service also recovered the body of another unidentified man, who fell into a deep well of about 150 feet on Monday night.

Fadipe, who said that the incident happened at Iju Ishaga area of the state, stressed that it took them many hours before they retrieved the body.

He said, “We got information that a male adult fell into a deep well of about 150ft deep at Iju Road, besides Skye Bank.

Our men mobilised and went there immediately, but were able to retrieve the body many hours later on Monday.

“The well is located at a virgin land, no one knows what the victim was looking for before falling into the well.”
Posted by dubem naija blog at 4:50 pm