Rapper sentenced to 7 years in jail for gang offences 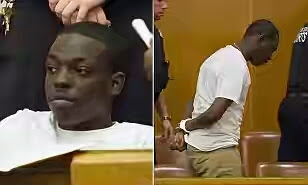 An up-and-coming Brooklyn rapper arrested on conspiracy and weapons charges will serve seven years after reaching a plea deal on Friday. Bobby Shmurda, whose real name is Ackquille Pollard, pleaded guilty before his trial on Monday in the Manhattan Supreme Court, where he faced the possibility of serving up to 25 years if convicted.

The 22-year-old Shmoney Dance hit-maker was arrested in December 2014 on conspiracy, reckless endangerment and gun possession charges and remained behind bars for nearly two years on $2million bond.

Shmurda appeared in court on Friday along with his friends Chad Marshall and Nicholas McCoy, who accepted the same deal. After a fixed seven year sentence, Shmurda will be on probation for another five years, the New York Daily News reports.


Shmurda was arrested after leaving a recording studio near Radio City Music Hall on December 17, 2014. Police found two handguns and a small amount of crack cocaine in a car the three friends were riding in, authorities said.

A 15-person indictment named Shmurda as the leader of the G Stone Crips, also known as GS9, whose members were charged with 69-counts including murder, attempted murder, assault and drug dealing.

The gang left one rival dead outside a Brooklyn bodega, and injured an innocent bystander sitting on a folding chair outside a home, according to the police.

The GS9 members were cited in various shootings in New York City as well as a Miami, Florida nightclub, authorities said.

The 22-year-old has also been hit with charges of conspiracy to commit murder in a separate case after he allegedly tried to sneak a knife into Rikers Island with the help of a woman believed to be his girlfriend.

Shmurda has also filed a false-arrest lawsuit in response to a separate incident in June, after police knocked on the door of his friend's home.

The suit claims the cops didn't have a search warrant and mocked him by singing his lyrics during the arrest.