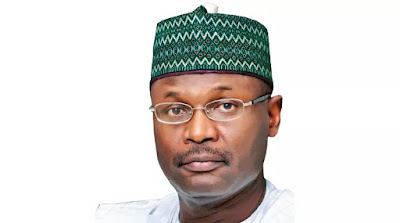 The Independent National Electoral Commission (INEC) will today accede to the demand of both the Nigeria Police and the Department of State Services (DSS) to postpone the Saturday, September 10 gubernatorial election in Edo State, New Telegraph has learnt. Impeccable source in INEC told New Telegraph last night that the commission will formally announce the postponement of the election today.

Thousands of students in Edo, across Nigeria and West African countries will be sitting for the Mathematics exams on Saturday between 9:30a.m. and 3:30p.m. Students who registered for the examination had staged a protest calling for the postponement of election.

New Telegraph learnt that about 1,700 students have rejected plan to transfer them to neighbouring states for the examination. A source in INEC told New Telegraph that a meeting of the electoral body with the heads of security agencies will hold today in Benin after which INEC will announce its position.

INEC chairman, Prof. Mahmood Yakubu, confirmed that the electoral body had consulted with critical stakeholders and would meet with top echelon of security agencies before it could take an official position on the matter.

At the meeting, the Police and DSS will share the intelligence report on the planned attacks by the terrorist group.The source added that “Edo State has been calibrated and waiting for explosion” with the importation of thugs into the state.

“Both Police and DSS are to provide security for the election, and if the security agencies advised against the conduct of the election, we have no choice. If we do otherwise and anything untoward happens, INEC will be held liable.

So, we will definitely shift the election,” an INEC official told New Telegraph last night. Governor Adams Oshiomhole yesterday confirmed that political thugs have been imported to the state for the election.

Oshiomhole appealed to INEC “that if INEC is shifting the election, it should not be too far because we are eager to bury the PDP, we have purchased their coffin and ready to be sealed.

“Mr. Nick Dazang, Deputy Director of Voter Education and Publicity at INEC, said that in the aftermath of the advice to postpone the election, INEC met with stakeholders in Benin to seek their views and inputs on the matter.

“What the commission has resolved after the meeting is that it will go back and consult with the security agencies to find out the details, because they are the ones that initiated that communication.

“After that, the commission will meet and take a decision,” Dazang said. On the stakeholders’ reaction to the advice, he said: “They were over-whelming in support of going forward with the election as scheduled.

“Most of the political parties, too, were in support, but some of the parties were of the view that we should be careful and get more details on the information.”

The Police and DSS had, earlier yesterday, called on INEC to postpone the Saturday election in Edo State, owing to security concerns. The two security agencies said their call was predicated on available intelligence indicating plans by extremist elements to attack vulnerable communities, as well as crowded places during the Sallah celebration.


Incidentally, the security agencies said Edo State was among the vulnerable targets.In a statement jointly signed by the Force Public Relations Officer (FPRO), Don Awunah, Deputy Commissioner of Police (DCP), as well as Mr. Garba Abdullahi of the DSS, the agencies acknowledged the statutory responsibility of the INEC in conducting elections in the country.

They, however, noted that national security will not be compromised on the altar of elections. It was their considered view that the shifting of the much-anticipated poll will enable them deal decisively with the imminent threat.

“The Nigeria Police and Department of State Services, wish to inform the general public that credible intelligence availed the agencies indicate plans by insurgent/extremist elements to attack vulnerable communities and soft targets with high population during the forthcoming Sallah celebrations between 12th and 13th September, 2016.

“Edo State is amongst the states being earmarked for these planned attacks by the extremist elements. “The public would recall that similar threats were issued during the May Labour Day and Democracy Day celebrations as well as the Eid-el-Fitr holidays in July, 2016. However, the security agencies were able to decisively disrupt and thwart the insurgents’ plan.

In the same vein, while election is important, the security agencies cannot allow the peace of the country to be disrupted and we will continue to remain vigilant and ensure consolidation of the successes gained in the current counter-insurgency fight.

“It is in regard of these that we are appealing to INEC, which has the legal duty to regulate elections in the country, to consider the need for possible postponement of the date of the election in Edo State in order to enable security agencies deal decisively with the envisaged terrorist threats,” the joint statement read.

While acknowledging the inconvenience the postponement might cause, the statement stressed the need to allow security agencies discharge their mandates, without let or hindrance.

It said: “While the Police/ DSS remain mindful of the inconveniences this request may cause the various political stakeholders, it is our strong resolve that security agencies need not be distracted from ensuring a peaceful and secured Nigeria now and always.”

To this end, the Police and DSS assured the public “that the security agencies will continue to remain focused and committed and are being enjoined to remain vigilant,” adding that “the attention of the security agencies should be drawn to any observed unusual movements or actions by groups or individuals in their neighbourhoods.”

Posted by dubem naija blog at 9:41 am