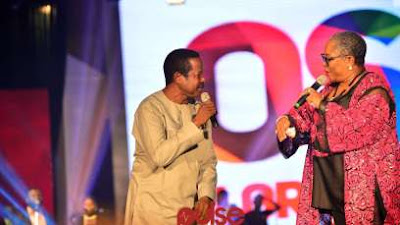 Juju music legend, King Sunny Ade, has denied claims that he once had a crush on 'Iyogogo' singer, Onyeka Onwenu, stating that their relationship is strictly professional. He mentioned this during a press parley on his 70th birthday, where the world music pioneer, said their romantic 'Wait for me' song collaboration was nothing more than a message for the youths.

“I didn’t have any crush on Onyeka then. Even before that song, we had recorded some songs together. She was (and still is) just a colleague." "She is a good woman. We did that song just for us to teach the young people the essence of having a healthy relationship.”

KSA, as he is also known, was not patronizing concerning the thought of marrying another wife. He said, “Haba! How can I take another wife? Is that a curse or are you praying for me? I am not ready for any new wife.”

The singer spoke of his birthday, which is often a week celebration. However, there will be a slight change in this year's event, which will run till the end of 2016, with a concert in Ondo State, the hometown of the legend.