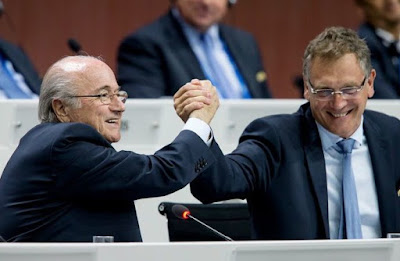 
Ethics prosecutors say their investigation relates to bribery and corruption, accepting gifts and conflicts of interest.

FIFA said in a statement: “The investigatory chamber will investigate possible violations of art. 13 (General rules of conduct), art. 15 (Loyalty), art. 19 (Conflicts of interest), art. 20 (Offering and accepting gifts and other benefits) and art. 21 (Bribery and corruption) of the FIFA Code of Ethics (FCE) in the context of salaries and bonuses paid to Mr Blatter, Mr Valcke and Mr Kattner as well as other provisions included in the contracts of these three individuals.

“Furthermore, the investigatory chamber will investigate a possible violation of art. 16 (Confidentiality) of the FCE by Mr Kattner.”

Blatter and Valcke are already serving ethics bans and face criminal proceedings by Swiss federal prosecutors.
Posted by dubem naija blog at 8:59 am