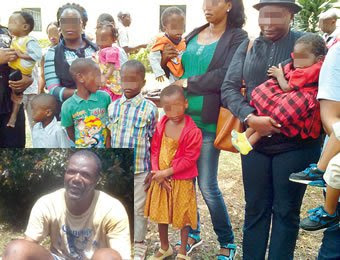 The police in Delta State have smashed a syndicate that specializes in buying and selling of children. The syndicate, which is allegedly led by Pastor Chinedu (surname concealed), who claimed to head a Pentecostal ministry in Ogidi Anambra State, was alleged to have kept 12 children in his custody.

The 48-year-old pastor connived with others, namely, David, Ebere, Adaeze (a 22-year-old lady) and 55-year-old Chike (all surnames withheld by us) are now being held for interrogation at the headquarters of the command in Asaba, the Delta State capital.

The Commissioner of Police, Mr. Zanna Ibrahim, said that the pastor paid N400,000.00 for each child sold to him. The bubble burst when one Aisha Yahaya of Umuezei quarters, Asaba, raised the alarm that two female members of the syndicate, Nnoruka (surname withheld) and Chidinma (surname withheld) tricked her and stole her one-year-old child.

Yahaya told the police that the suspects posed as prison officials from Ogwashi-uku Prisons, adding that they allegedly brought a message from her husband.

“The complainant further disclosed that she followed them to a junction where they met one woman, Abigail (surname withheld), who gave her N3,500.00 and asked her to go and buy clothes for her daughter, Fatima Yahaya.
“In the process, the little girl was stolen by the syndicate. She, however, raised alarm that led to the arrest of 21-year-old Nnoruka and Chidinma, 20, while they were attempting to escape,” Ibrahim told journalists.

He spoke further: “Based on this, detectives immediately swung into action and arrested a member of the syndicate, 11-yesr-old Onyinye, daughter of Abigail who was found with the stolen little girl, where she was at a drinking bar in Asaba.”

The police boss explained that the 32-year-old Abigail and Ifeoma, a lady, who were arrested at Okpanam, confessed to the crime and led detectives to Ogidi, Anambra State, where 12 suspected stolen children were recovered from the pastor.

He said the suspects were undergoing investigation while two of the recovered children were handed over to their parents. The remaining 10 within the age bracket of six months to two years are being kept at St. Barnabas Orphanage, Asaba, pending identification by their families. He added that efforts were on to apprehend other members of the syndicate.
Posted by dubem naija blog at 8:30 am