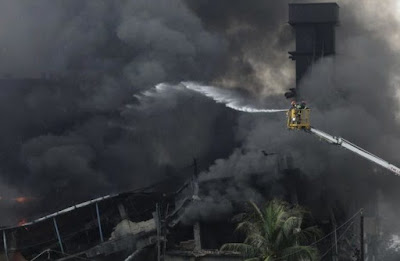 At least 22 people have been killed and 70 injured, many critically, in a huge fire triggered by a boiler explosion at a Bangladeshi packaging factory, officials said Saturday as firefighters struggled to contain the blaze. Around 100 people were working when flames tore through the four-storey building in the industrial town of Tongi, just north of the capital Dhaka.

“We still have not controlled the blaze and we fear some workers are still trapped in the factory,” police inspector Aminul Islam told AFP.

Parvez Mia, a doctor at the Tongi government hospital, told AFP at least 70 people were injured.

“Most of them had burn injuries. We sent the critically injured victims to the hospitals in Dhaka,” he said. “Several of them are very critical,” he added.

“I was working inside the office room when I heard an explosion and felt a tremor. Then suddenly the ceiling started to fall on me,” he told AFP from his hospital observation bed.
“I almost became unconscious. But I forced myself to go out with the help of my mobile phone’s flashlight.”

Machine operator Rubel Hossain was two minutes away from entering the factory when the blast occurred.

“I heard a huge explosion and saw smoke and fire coming out of the factory,” he said.
“I am simultaneously feeling lucky and heartbroken,” he said, tears streaming down his face as he helped rush the many injured to hospital, blood staining his T-shirt.

The tragedy struck as families were preparing to celebrate the major Muslim festival of Eid al-Adha.

“My brother Delwar Hossain told us last night he would take us to our home district of Sherpur. Now he is going to be buried there,” said Khaleda Begum, the sister of a factory worker killed in the accident. “Eid is ruined for our family.”

Chemicals may have been stored on the ground floor of the factory, helping to explain how the blaze that began at 6:00 am (0000 GMT) spread so fast, said Tahmidul Islam of Bangladesh’s industrial police unit.