3,000 Women farmers in Ebonyi protest against destruction of farm crops by herdsmen 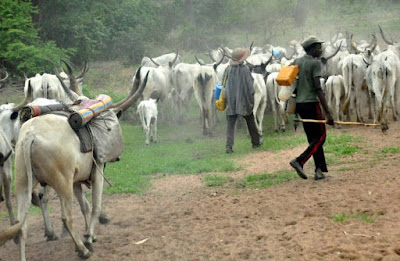 No fewer than 3,000 Ishiagu women on Friday staged a peaceful protest against the destruction of farm crops by herdsmen to the Palace of the traditional ruler of the community, Ezego Moses Ngele.


The women, mainly peasant elderly farmers, marched peacefully to the palace of the monarch.
They demanded urgent action to end the alleged indiscriminate destruction of cash crops and other farm produce by herdsmen grazing their cattle in the area.

Chanting solidarity songs and brandishing green leaves, the women urged the traditional ruler to prevail on the herdsmen to stop using their cattle to destroy their crops.

The protesters also requested for immediate exit of the herdsmen from the community to save their farm lands and the people from imminent famine.

The spokesperson for the group, Mrs Janet Aja, said that they were at the palace to register their grievance over the destruction of their crops by herdsmen who allow their cattle to feed on their cash crops and other farm produce in their farms.

Aja said that all the crops including yam, cassava and rice, among others, have been destroyed prematurely by the rampaging herdsmen. They expressed fears that the farmers might be left with nothing to harvest.

She said that farmers, especially the women in the community, were at present not able to go to their farms for fear of being attacked by the herdsmen.