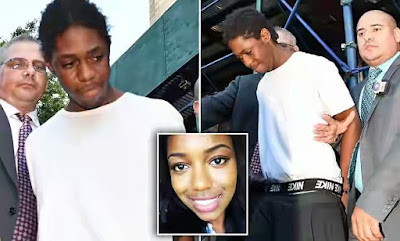 Reginald Moise, seen here being walked to his arraignment at Brooklyn Central Booking Wednesday, is alleged to have gunned down 22-year-old Tiarah Poyau at Brooklyn's J'Ouvert festival because she objected to him grinding on her at a Caribbean culture carnival on Monday. Poyau was shot through the eye after telling a man 'Get off me,' while walking with friends, cops said. Moise, 20, has been charged with her murder. See pix of the lady below.. 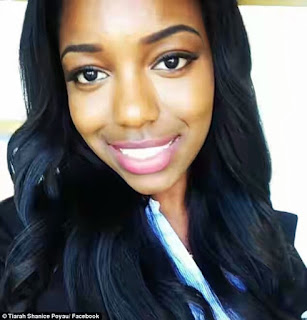 Moise is alleged to have made statement implicating himself to other people prior to his arrest. He has been charged with second-degree murder, criminal possession of a weapon and reckless endangerment.

Poyau had been walking with three friends early Monday morning when she was shot in the eye 'at close range' around 4.15am, according to the New York Post.

Authorities said Moise was driving drunk and had a Caribbean flag wrapped around a bloodied hand when he was arrested on Tuesday morning.

Moise, who has five prior sealed arrests, allegedly called a friend after the shooting and told them: 'Would you mind if I put my gun into your apartment?'

He then told another friend: 'I think I shot somebody on the parade route. I didn't know the gun was loaded,' according to police sources.

Moise allegedly fled to to his girlfriend's apartment following the shooting. It was there he drunkenly fired two shots into a mirror, which caused the injury to his hand.

One of the bullets entered the home of a neighbor, who then notified authorities.

Moise then fled into his car and crashed into several parked vehicles, losing one of his tires, before he was stopped by police around 8am on Tuesday.

Police said they discovered the gun that killed Poyau at Moise's girlfriend's apartment, with tests confirming it matched to a shell found at the murder site.

Chief of Detectives Robert Boyce said Moise told investigators he thought he shot somebody, saying: 'The gun went off, I'm not sure.'

Meanwhile, no arrests have been made in the murder of 17-year-old Tyreke Borel.

Borel, of the Bronx, was shot in the chest about 3:50am near Empire Boulevard and Flatbush Avenue durin the festival.

He was taken to the hospital, where he died.

Poyau was shot just a block away 30 minutes after Borel was shot, police said. She died at the hospital.
Posted by dubem naija blog at 4:05 pm