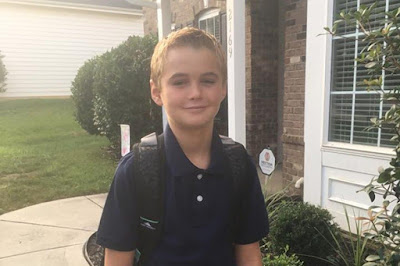 An 11-year-old South Carolina boy has accidentally killed himself while playing “The Choking Game.” Garett Pope Jr., a sixth-grade student in Indian Land, died after trying to cut off his ability to breathe to achieve a feeling of euphoria, according to the Lancaster County coroner’s office. His father Garrett Pope Sr. posted to Facebook in a plea for parents to talk about the dangerous practice with their kids. He wrote:
“My family has never felt pain like this before, and we don’t (want) anyone else to go through what we are going through,”
NY Daily news reports that, the father said that his family’s computers showed no signs of research about the “game,” and speculated that his son learned about it from other kids at school who could be playing it.
Posted by dubem naija blog at 12:26 pm