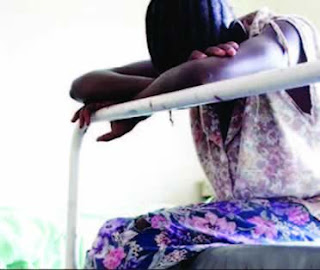 For raping and taking the naked pictures of a 23-year-old woman after drugging her, an undertaker, Sheriff Oyewole, 29, is to spend the next nine years in a Lagos prison. A Tinubu Chief Magistrates’ Court handed down the verdict on Tuesday after it found the rapist guilty on all five-count.

Oyewole was first arraigned on Aug. 19, 2015 on a five-count charge of rape, assault, threat to life, drugging and taking indecent pictures of his victim. The Chief Magistrate, Mrs Kikelomo Ayeye, ruled:“With all the evidence before the court, you are found guilty.
“You are hereby sentenced to five years imprisonment each on the first three counts which you are to run concurrently.

“You are sentenced to three years on the fourth count and one year on the fifth count.”

Ayeye said the nine years in prison would be effective from the date of arraignment.

Earlier, the prosecutor, Insp. Nurudeen Thomas, told the court that the accused committed the offences on Aug. 16, 2015 at 8.00 p.m. at Aro Hotel in Lagos.

He said victim’s father had asked her (an introvert) to go with the accused, who had been living with the family for years to a party.

The prosecutor further explained that Oyewole put some drugs in the Irish cream he served her and refuse to let any other person at the party take the drink with her.

“The accused lured the victim into the Hotel in her sedated state, tore her clothes, soaked them in water, after beating and raping her.

“He also took her Unclad pictures. When the victim regained her consciousness, the accused threatened to post her pictures on the internet if she told anyone what happened.

“The accused followed her to her mother’s shop where her mother and others at the shop noticed her unusual appearance and started asking questions,” he said.

Thomas said Oyewole bolted when he saw that the victim was going to tell her mother what happened, but was caught by a mob who handed him over to the police.

“The girl’s underwear was found in his possession and the Unclad pictures were also in his phone.”