South Carolina teens rob, kill man after he helps them out of trouble 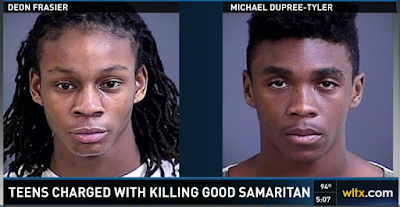 A pair of murderous South Carolina teens robbed and fatally shot a good Samaritan after he helped them pull their car out of a ditch, police said Tuesday. Deon Frasier, 17, and Michael Dupree-Tyler, 19, were arrested at an apartment less than six miles from the intersection of Durant Ave. and North Jimtown Dr. where police say they robbed and killed 45-year-old Chadwick Garrett around 11 p.m. Monday after he helped them haul their Dodge Durango out of a ditch.

Garret was pronounced dead on the scene by medical officials, a spokeswoman for the Charleston County Coroner's office said.

One of Garrett's family members sounded distraught when reached over the phone Tuesday afternoon.

"We're sad. Nobody is going to want to talk right now," the family member sniffled, refusing to identify himself.

Frasier and Dupree-Tyler were slammed with murder charges and are expected to be arraigned Tuesday afternoon.

Court records show Dupree-Tyler pled guilty to drug possession in 2015 and Frasier was out on a $10,000 bond for possession of a stolen vehicle at the time of the ghastly Monday night murder.
Posted by dubem naija blog at 8:59 am