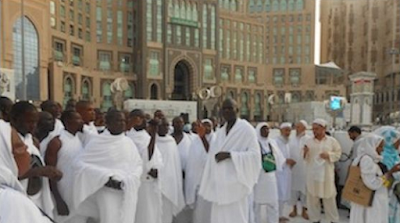 Two Nigerian pilgrims arrested in Saudi Arabia over possession of substances alleged to be cocaine have been released, the National Hajj Commission of Nigeria (NAHCON), has said. A statement by the Commission issued in Abuja yesterday, said that the arrested pilgrims from Kwara State were released following investigation that they were not culpable for the offence.

According to the statement obtained from the Kingdom revealed that the two suspects were set free after it was discovered that the allegation for which they were arrested was not correct. It would be recalled that two Nigerian pilgrims from Kwara State were arrested on August 9 and 12 over alleged trafficking of drugs into the kingdom.

The identities of the two pilgrims affected have remained unknown even as anxiety has continued to grow in Ilorin, capital city of Kwara State among residents who have relatives performing this year Hajj exercise.
Posted by dubem naija blog at 10:06 am