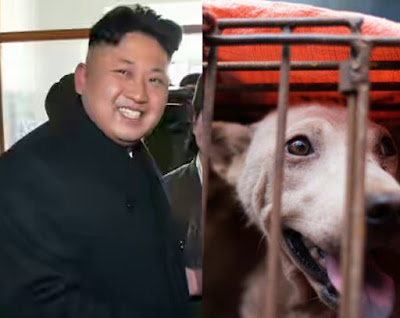 Tyrant Kim Jong-un has hailed DOG MEAT as a superfood to try and encourage more of his starving population to eat pups. The North Korean leader is encouraging everyone to eat more dog meat, suggesting it contains more vitamins than chicken, beef, pork and duck. Sickeningly, the state's propaganda channel even claims that torturing a dog to death improves its taste.

According to North Korean YouTube propaganda channel DPRK Today, the dish is a traditional "stamina food" and is good for the stomach and intensines.

The Korea Times reports that the channel encourages people to beat the dog to death, before removing its fur and scorching it. Several other media outlets in North Korea have also lauded dog meat as a nutritional option, with radio station Tongil Voice describing puppy stew as "medicine".

Despot Kim has warned his people they may have to go on "an arduous march" - the name for the four-year famine which killed millions in the 1990s.

The obese dictator loves gorging on European cheese and fine wines while two-thirds of his people struggle to survive on reduced state food handouts.