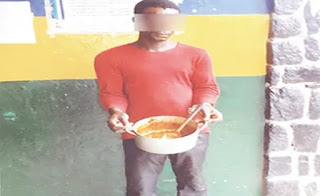 Detectives attached to Ajegunle Police Station, Lagos have arrested a man, who allegedly poured a bottle of ‘sniper’ into his neighbour’s pot of soup on Tuesday, while it was on the fire. The suspect, Daniel, was alleged to have attempted to wipe out the family of three with the dangerous insecticide because his neighbour’s wife, Saidat, was always insulting him for not meeting up with his electricity bill payment.

Saidat was cooking, when she briefly stepped out to buy something. Before she returned, Daniel had doused the soup with a bottle of sniper. Saidat, her husband and their only child, would probably have died, if not because she sniffed the sniper’s odour. Daniel said it was the devil which made him to pour sniper into his neighbour’s pot of soup.

He said: “I don’t have any problem with my neighbour, Shakiru, but his wife, Saidat, was always insulting me over electricity bill. I don’t know what came over me; I decided to pour sniper into the pot of soup to punish her. I’m sorry. I regretted what I did and what I almost caused.”

It was learnt that after Saidat sniffed the offensive stench from the soup, she knew something was wrong. She immediately suspected Daniel, because he was the only tenant at home, aside from her. She alerted the landlord of the storey building.

When Saidat was asked whom she suspected, she fingered Daniel. The matter was taken before the Baale of Aiyetoro 1 community, Ajegunle, Chief Saheed Fakunle. After listening to the matter, Fakunle handed Daniel and Saidat over to Ajegunle Police Station.

A police source said: “Saidat was cooking her soup after her husband, Shakiru, had gone to work on Tuesday afternoon. Four tenants live on the ground floor of the onestorey building, located at Baale Aiyetoro Street.

On Tuesday, only Sadiat and Daniel were at home. Saidat went outside to buy something and before she returned, Daniel had doused her soup with sniper.” When she returned and opened the soup, she immediately smelt the changed aroma of the soup.

When her husband, Shakiru returned, Saidat revealed her suspicion. Mr. Taiye Aroyewun, who is landlord of the building, where both Daniel and Saidat live, condemned Daniel’s action.

Aroyewun disclosed that Daniel sells Compact Discs (CDs) at Boundary Market, Ajegunle. He said: “Daniel must be mad. He said he had no quarrel with his neighbours, aside from the electricity bill problem the previous day. So why did he want to kill a whole family? Apart from Saidat’s family, friends might want to eat out of the soup. Daniel would have killed so many people, if not that the woman was vigilant.”

Aroyewun, who described Daniel as strange, said the man was aging and refused to get married. He said that Daniel also “doesn’t”. He said that he only accepted one year rent from Daniel, which, according to him, expires this month.

He said: “Since Daniel was caught, he had been begging. He had been trying to settle the matter, but everyone refused to listen to him. He is a wicked man! If I forgive him today, he could chop off my head tomorrow.

Let him go to the State Criminal Investigations Department (SCID) and explain himself.” It was learnt that the incident caused panic in Ajegunle, with husbands warning their wives, never to leave pot of soup or edibles, unattended.

New Telegraph
Posted by dubem naija blog at 7:14 am