We killed seven Shiite Muslims to save Buratai’s life – Army 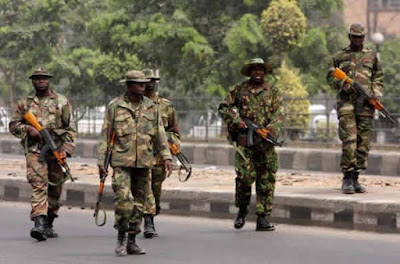 The Nigerian Army has said it killed seven members of Shiite sect in Zaria, Kaduna State and wounded 10 other members of the group while repelling an attack by the group against the convoy of the Chief of Army Staff, Lt.-Gen. Tukur Buratai, on Saturday.

The army said the shooting by the troops accompanying the COAS’ convoy was “in line with Rules of Engagement” and aimed at saving the life of the COAS from “heavily armed” members of the Sheikh Ibrahim El-Zazaky-led Shiite sect.

The army’s version of the conflict was contained in the “Occurrence Report” prepared by the Nigerian Army Corps of Military Police and attached to a petition submitted by the office of the COAS to the headquarters of the National Human Rights Commission in Abuja on Monday.

The December 14, 2015 petition with the title, ‘Letter of complaint against Shiite sect attack on the Chief of Army Staff’, and with reference number NA/COAS/G1/52 was signed by Col. F.U Mijinyawa on behalf of the COAS.

The petition which was addressed to the Executive Secretary of the NHRC, Prof. Bem Angwe, who received the representative of the COAS in his office, Maj.-Gen. Adamu Abubakar , on Monday.
“This is forwarded for your information and necessary action,” the petition stated.

The petition stated that over 500 members of the sect rushed out to barricade the road while the COAS was on his way from Dutse to pay homage to Emir of Zazzau before proceeding to attend the Passing Our Parade of the 73 Regular Recruit Intake.

The occurrence report with reference number HQ NACMP/G1/300167 detailed how the Shiite group “heavily barricaded” the road, allegedly preventing the convoy of the COAS to pass through for a courtesy visit to the Emir of Zazzau.

The report stated that members of the sect were “heavily armed with dangerous weapons, ranging from long swords, knives, daggers, sticks, iron rods to catapult” at about 2.30pm on Saturday around the Polo/Golf Court on Sokoto Road where they mounted the barricade in Zaria.

It added that the group defied the soldiers’ warning shots and had allegedly started hauling dangerous weapons towards the troops while also planning to launch a “petrol bomb” attack against the COAS’ convoy.

The report stated, “However, troops were wary of the group being armed with guns. Some members of the COAS entourage disembarked to approach the armed group to talk with them to remove the barricade to allow free passage.
“All entreaties fell on deaf ears as they insisted that they had to contact their leader, El-Zazaki, before the COAS would be allowed passage.

“However, as this was going on, unknown, to the convoy, some of the members of the group had positioned themselves at strategic locations around the vicinity. A few of the group members had started crawling in the overgrown grasses by the roadside towards the COAS vehicle with the intent to attack the vehicle with petrol bomb.

“Subsequently, they suddenly resorted to firing gunshots from the direction of the mosque and hauling dangerous weapons towards the troops. Despite the troops firing warning shots, the El-Zazaki’s group continued attempting to forge towards the troops.

“The troops immediately responded in line with Rules of Engagement as the life of the VIP (COAS) was seriously threatened.

“Troops had to shoot their way through up to the Zaria Post Office area by PZ to provide a safe corridor for the COAS and the convoy to pass through before the arrival of the reinforcement from Depot NA.

“The COAS then proceeded to the Emir’s palace for the courtesy visit before moving to Depot NA to review the 73 RRI Passing Out Parade.

“Sequel to the above, about seven of the members of the group were shot dead and the COAS directed that the 10 wounded be evacuated to the Depot NA Medical Centre for treatment while all exhibit items such as swords, knives, cell phones are recovered from the scene.”

The report stated that the exhibit items were handed over to the Nigeria Police.

“Furthermore, the Nigerian Army School of Military Police Provost Admin Coy was directed to investigate along with the Nigeria Police,” the occurrence report stated.

It added that a detailed report would be forwarded to the commission when the investigation was concluded.

In response, Angwe assured the visitors that the NHRC would conduct detailed independent investigation into the incident.

Posted by dubem naija blog at 7:26 am