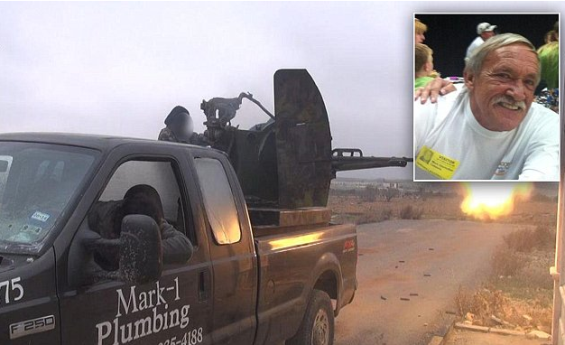 Mark Oberholtzer, owner of Mark-1 Plumbing in Texas City, left the 'Mark-1 plumbing' stickers on the truck when he traded it in for a newer Ford pickup at AutoNation Ford Gulf Freeway in October 2013. A year later, a photo posted on Twitter by the extremist Ansar al-Deen Front from the front lines of the war in Syria showed his truck, stickers and all being used by jihadis. Oberholtzer, who says he has received death threats, is now seeking more than $1million in punitive damages from AutoNation Ford Gulf Freeway for fraud, gross negligence, negligent misrepresentation, defamation, invasion of privacy and deceptive trade, according to Courthouse News. 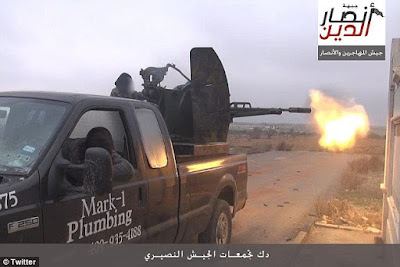 At the time he turned his truck into the dealer, he started peeling the stickers off his truck, but a salesman stopped him, telling him it ‘would blemish the vehicle paint’ and ‘the dealership had something better for removal’, Oberholtzer said in a lawsuit in Harris County Court.

On December 17, 2014, Oberholtzer’s secretary called him to let him know that a member of the jihadi group Ansar al-Deen tweeted a ‘propaganda photograph’ with a message reading: ‘using plumbing truck against regime in #Aleppo’.

‘By the end of the day, Mark-1's office, Mark-1's business phone, and Mark's personal cellphone had received over 1,000 phone calls from the around the nation. These phone calls were in large part harassing and contained countless threats of violence, property harm, injury and even death,’ Oberholtzer’s complaint said.

The plumber said his secretary was too scared to go to the office and that he was afraid for himself and his family, so he traveled to McCallen to escape the backlash.

After the photo and video went viral, ‘USA Today, CBS, NBC and Inside Edition’ requested interviews and the FBI and Department of Homeland Security stopped by to tell him ‘there are crazy people out there’ and that he should ‘protect himself’.
Oberholtzer’s complaint also mentions The Colbert Report’s final episode, which ‘began with the segment “Texan’s Truck in Syria”,’ which featured his truck and was the ‘most watched episode ever in the show’s history’.

A year later, Oberholtzer said he still gets threatening phone calls ‘whenever ISIS commits an atrocity that is reported nationally’.


Culled from UK Daily Mail
Posted by dubem naija blog at 7:07 am