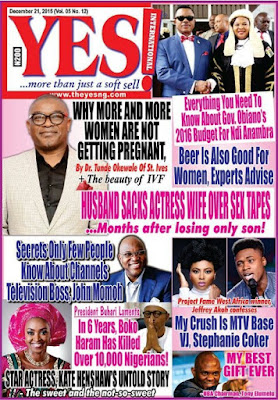 One of the biggest report about the hit the Nigeria movie industry is how actress Uche Iwuanyawu got chased out of her matrimonial home by her husband, barely three months after their traditional marriage. The report which first appeared on YES INTERNATIONAL! Magazine said that her husband Godfrey Nnanna, who is based in Houston Texas, United States of America stumbled on some shocking documentations about his wife who lives alone in Nigeria that he just couldn’t stomach.
According to Media investigation, Godfrey who is also the son of HRH Eze Prince G.A. Nnannah, the Eze Isiala 1 of Nkwerre in Imo state called Uche from his US base and asked her to vacate their matrimonial home; that he was no longer interested in the marriage, and that she should expect his divorce papers soon.

One of Godfrey's sisters, Judith introduced the couple to each other, and they immediately fell for themselves and not long after they were married.

They had their traditional wedding on August 29th and went their separate ways in early December.

The only thing that would have Rescued the marriage was their son that they had before the wedding but the boy is now dead. The child reportedly took I'll and passed away.

Family sources report that out of shame the stunning actress has now but become a shadow of her old self. Constantly crying and asking God ''why me?''. She has also fallen into depression so much, that some of her close friends and family members are said to be keeping vigil around her lest she comes to any harm.

“Godwin must have dumped her after being shown some crazy sex stuff she did in the past and it’s to avert any scandal that may further dent her image and career that he asked her to vacate their matrimonial home and she did without raising any dust”, a source revealed.
Posted by dubem naija blog at 12:09 pm