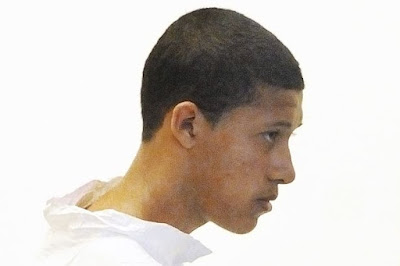 A teenager who raped and killed his maths teacher while at school faces life in prison after being convicted. Jurors today found Philip Chism guilty of first-degree murder in the death Colleen Ritzer as Danvers High School in Massachusetts. The teenager’s defence lawyers claimed he was in the midst of a psychotic episode when he stabbed her 16 times in the neck in the women's bathroom.

Prosecutors said the schoolboy, who was 14 at the time, used a box cutter to brutally stab the 24-year-old, before using a recycling bin to take her body into the woods.

Once there he raped her and violated her with a wooden stick before abandoning her half-naked.

He was found guilty of first-degree murder, one count of aggravated rape, including natural and unnatural rape and armed robbery.

Chasm, 16, was found not guilty on a second count of aggravated rape.

During the trial jurors were shown CCTV footage of the pupil following Ritzer into a bathroom, wearing a hood and putting on gloves.

“The only still image that matters in this case is the image of Colleen in the woods,” prosecutor Kate McDougall told jurors who deliberated over two days.

Posted by dubem naija blog at 6:38 am