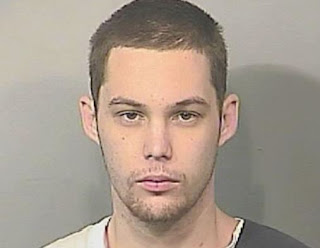 A suspected burglar has been killed by an alligator while hiding out in a pond. The body of Matthew Riggins, 22, was found in water in Barefoot Bay in Florida ten days after he was reported missing. Police said Riggins was attacked by an 11-foot long alligator while he was hiding out after a series of planned break-ins.


Before he was reported missing, Riggins called his girlfriend to tell her he would be in the area breaking into homes. Two men dressed in black lurking behind homes were spotted by residents, leading to a police search of the area that involved a helicopter and dog units.

The search was called off but Riggins was reported missing by his family the next day.

Major Tod Goodyear, from the Brevard County Sheriff’s Office, told BayNews9: “He probably went into the lake to hide from the officers and the dog, and came across that gator.

“To hide somewhere to try and get away, and then meeting up with an animal like that, no, I’ve never had that happen before.”

When a police dive team located Riggins’ body, they also came across the alligator, which was euthanised.

Some of Riggins’ remains were found inside the animal’s stomach.
Posted by dubem naija blog at 4:33 pm