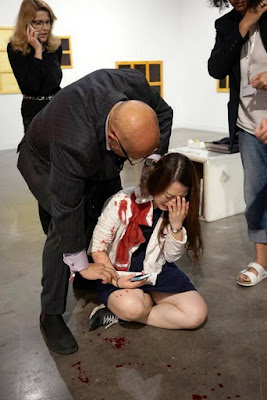 A woman was violently stabbed at Art Basel Miami, the biggest art fair in the US and visitors watched because they thought it was performance art. Siyuan Zhao, a 24-year-old woman from New York, was arrested and charged with attempted murder after stabbing the victim’s arms and neck with an X-Acto craft knife. Onlookers failed to react, thinking the brutal attack was one of the artworks.

The victim, who has not been identified, was rushed to Jackson Memorial hospital but her injuries are not life-threatening.
According to police documents, Zhao spontaneously said ‘I had to kill her and two more!’ and ‘I had to watch her bleed!’ as she was being searched.

Posted by dubem naija blog at 5:37 am