Oscar Pistorius to appeal against his murder conviction 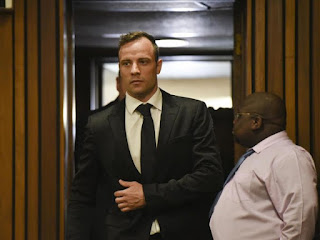 Former Paralympic champion Oscar Pistorius was released on bail on Tuesday, as he vowed to appeal against his murder conviction for shooting dead his girlfriend Reeva Steenkamp in 2013. South African judges last week found him guilty of murder and overturned his earlier conviction on the lesser charge of culpable homicide for killing Steenkamp, a model and law graduate.

Pistorius, 29, wearing a dark suit, white shirt and black tie, appeared relaxed at the bail hearing in the Pretoria High Court, chatting with his legal team before standing in the dock to hear the judge’s ruling.

He was released from jail in October to live under house arrest at his uncle’s house in Pretoria after serving one year of his five-year prison sentence for culpable homicide – the equivalent of manslaughter.

Under the new conviction for murder, he faces a minimum 15-year jail term that may be reduced due to time already spent in jail and as he is a first-time offender.
Posted by dubem naija blog at 10:43 pm