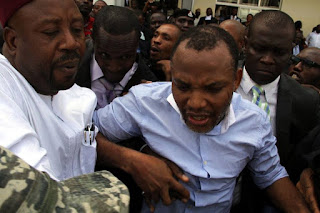 Magistrate of the chief magistrate court, Wuse zone 2, Abuja, Shuaibu Usman has on Wednesday, December 16 discharged director of Radio Biafra and leader of the Indigenous People of Biafra (IPOB), Nnamdi Kanu of all the charges brought against him by the DSS. Kanu was arraigned on the count charge of criminal conspiracy and ownership of an unlawful society by the Federal Government.

After holding that the government had dropped the charges against Kanu, the judge ruled: “The accused person is hereby discharged and the case struck out.”

The DSS had filed for the withdrawal of the case from the lower court so it can be charged to a higher court competent enough to try charges bordering on terrorism.

Usman had adjourned his judgement which initially scheduled for December 1, 2015 to Wednesday, December 16.

Nnamdi Kanu has been in custody of the DSS for over 90 days with the security agency flouting the order of the court to grant him bail in October.

The DSS had got a Federal High court in Abuja to overturn the order for bail from the lower court.
Kanu’s lawyer, Vincent Obetta however, filed a counter application requesting bail for his client.

Adeniyi Ademola, justice of the federal high court, Abuja, is expected to rule on the bail application on Thursday.