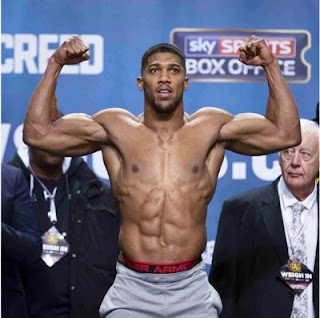 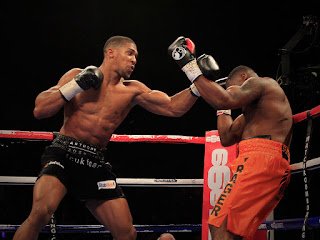 Since turning pro, the 26-year-old took his stunning record to 15 knockouts from 15 fights after winning the 2012 Olympic gold in London. Whyte’s courageous defiance and resilient chin extended the London Olympic champion Joshua beyond three rounds for the first time in his all-knock-outs professional career. However, it was Joshua’s heftiest sledgehammer blow that bagged him the winning title at the end of the day.
Joshua’s latest win raises the prospect of a clash with WBO and WBA heavyweight champion Tyson Fury if the fellow British fighter beats Wladimir Klitschko in their world title rematch.

Below are however 10 facts you need to know about the new champion...

1. He was born Anthony Oluwafemi Olaseni Joshua on October 15, 1989.Hes was born in Watford, England.

2. His mum is a full Nigerian while his dad is of Irish and Nigerian descent.

4. Before boxing, Anthony worked as a bricklayer at construction sites.

6. As an upcoming boxer, Joshua won numerous bouts and competitions which made him a kid to watch out for.

7. In 2011, he made it to the World Amateur Boxing Championship in Azerbaijan where he won silver medal.

8. Joshua won an Olympic gold for Great Britain at the London Olympics in 2012.

9. He has won all the 15 bouts of his professional career.

10. He knocked out Dillian Whyte to emerge the new British Heavyweight Champion. He once lost to Whyte in an amateur championship in 2009.
Posted by dubem naija blog at 8:08 pm