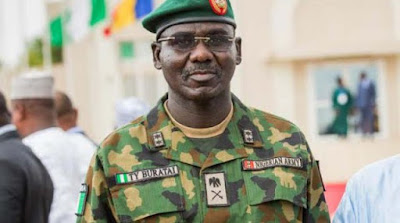 The convoy of Nigeria’s Army chief Lt General Tukur Yusuf Buratai today, in Zaria, Kaduna state, shot into a crowd of Shiite protesters, killing seven (7) of the unarmed protesters. The convoy of the army chief wanted to make use of a road the unarmed Shiites protesters had converged on, making it impossible for the convoy to pass through, which enraged Burutai.

The Army chief convoy shot into the air to disperse the protesters but they did not move, so they angrily shot live bullets into the crowd”, a witness at the scene said.  Seven of the protesters dropped dead instantly, leaving several others injured.

In an attempt to cover-up the killing, the Army rushed to Twitter to accuse the Shiite group of making an assassination attempt against Lt Col Buratai.

The Witness disclosed that the protesters conducted themselves in a peaceful manner, were unarmed, and he wondered how it is possible for unarmed protesters to try to assassinate Burutai, who has two (2) armored tanks as part of his convoy.

The had nothing on them, they were unarmed, not even sticks”, the witness disclosed.

Lt Gen Buratai is in Kaduna for the 2015 Kaduna Annual Music Festival.
Posted by dubem naija blog at 7:33 pm