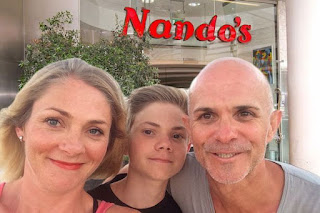 A mum was given a nasty surprise when she found a severely decomposed frog in her Nando’s salad. Super-fit athlete Louise Rudd, 41, had been tucking into the chicken quinoa salad at the Parrs Wood restaurant in East Didsbury with her son and husband when she made the horrific discovery.

A lab report ordered by Louise, from Cheadle, confirmed the amphibian was indeed a common European frog, and said the “most plausible scenario” for it ending up where it did was through the Skelmersdale-based factory Salads To Go which produces the pre-packed salad.

Louise said: “What disgusts me the most is that I’d eaten most of the salad when I found it as it had sank to the bottom.

“It was horrendous, it was still whole and spread out. I went to the to the bathroom and was sick.”
Louise, who won gold in both the 800m and 1,500m at the World Masters Championship in Lyon earlier in the summer, said she was more worried about what kind of frog it was and what implication it could have on her health., Manchester Evening News reports.

“I was right in the middle of my training. I had no idea what kind of frog it was. It makes me sick to think about it.

“If I’d been ill it would have had massive implications and floored my training routine.” Louise discovered this severely decomposed frog in her Nando's salad at the restaurant in Parrs Wood.

As a result of the experience in May, Nando’s offered her a free meal to compensate.

She added: “I haven’t been back since, I haven’t touched a pre-packed salad since, Salads To Go supply them to lots of supermarkets and chains. A lot of my friends won’t go back either.


“My 12-year-old son Aran went back though. Nando’s paid for him and nine friends to go to the cinema and then back to the restaurant for a meal.

“I also went to the factory in Skelmersdale with someone from Nando’s. I asked Salads To Go what they had done to stop things happening like this again.”

Louise joked the frog has since been dubbed Peri Peri Kermit by her friends.
it wasn't Kermit the Frog, who has appeared in another Christmas advert this year for Warburtons.
Posted by dubem naija blog at 6:57 am