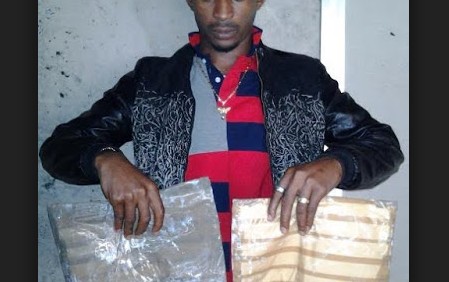 A suspected drug trafficker, Ikechukwu Obiabumuo, arrested with 1.5kgs of cocaine, has confessed to the crime, saying he indulged in it to raise money to pay debts he incurred during his mother’s burial. Ikechukwu, an indigene of Idemili South LGA, Anambra State, was arrested with one Osita Ifeagwu and a 31-year-old South African, Sipho Mitshali, by operatives of the National Drug Law Enforcement Agency attached to the Nnamdi Azikiwe International Airport, Abuja.
It was learnt that 4.7kg of cocaine was recovered from Ifeagwu, while the South African was caught with 4kg of ephedrine and 8kg of methamphetamine on his way to Johannesburg.

The drugs were estimated at N163m.

Obiabumuo said he used to trade in electrical appliances at Alaba market, Lagos, before he took to drug trafficking. He told NDLEA investigators that he was exporting the drug to Switzerland.

He said, “I used to sell electrical appliances at Alaba market in Lagos before I travelled to Czech Republic in search of greener pastures. I incurred some debts during my mother’s burial and I needed money to settle the debts. That was why I got involved in drug trafficking.”

According to Punch report, Ifeagwu, a father of three, said he smuggled the drug to Nigeria from Dubai in anticipation of raising funds to cater to his ailing daughter.

He said, “I am a business man living at Okota, Lagos. I am married with three children. My daughter was sick and I had spent so much money on her bills yet there was no sign of improvement. That affected my business and forced me into drug trafficking. I was desperate to save my daughter from death. The drug was given to me at Dubai airport, but on getting to Nigeria, I was arrested.”

NDLEA Commander at the NAIA, Mr. Hamisu Lawan, confirmed the arrest, adding that investigation was ongoing.

“The South African was caught smuggling 4kg of ephedrine and 8kg of methamphetamine to Johannesburg through Addis Ababa. Ifeagwu imported 263 pellets of cocaine weighing 4.7kg from Dubai; Obiabumuo was apprehended while attempting to export 1.5kg of cocaine to Switzerland through Frankfurt. The cases are being investigated,” he said.
Posted by dubem naija blog at 11:25 am