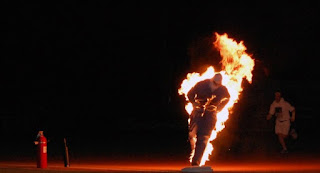 An Italian set himself on fire Monday, December 14, 2015 in front of the house of former prime minister Silvio Berlusconi and was rushed to hospital in a serious but stable condition, Italian media said. According to AGI news agency, the Sardinian approached the gate of billionaire Berlusconi’s Villa San Martino residence near Milan before setting alight his clothes, which had been doused in a flammable liquid.


Police on duty in front of the villa rushed to his aid, putting out the flames and evacuating the man by helicopter to hospital. There was no immediate indication as to why the man, said to be in his thirties, had set himself on fire.
Posted by dubem naija blog at 9:21 pm