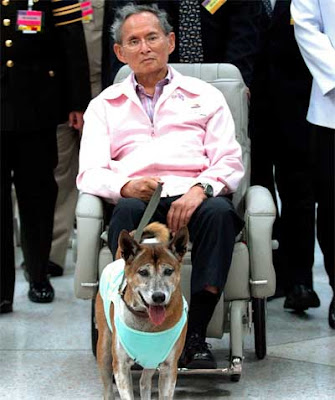 A 27-year-old man is facing a jail term for insulting the King of Thailand’s dog, the AFP reported.
Thanakorn Siripaiboon has been charged by police with lese majeste for a “satirical” Facebook post about King Bhumibol Adulyadej and his dog, his lawyer Pawinee Chumsri told the AFP. Lèse majesté is the crime of violating majesty, an offence against the dignity of a reigning sovereign or against a state and it has been prohibited by the law of Thailand since 1908.

Chumsri was quoted as saying, “There was a post including three photos on his Facebook page on December 6 with a message that satirised the king s dog.”

Apart from being charged for insulting the mongrel called Tongdaeng, Siripaiboon also faces charges of sedition and computer crimes for clicking “like” on a doctored photo of the king and sharing it as well as an infographic on a growing corruption scandal engulfing the junta.

The New York Times reported that Siripaiboon was arrested at his home in suburban Bangkok last week and authorities charged him with writing a “sarcastic” Internet post.

The Times said the 27-year-old faces up to 37 years in prison for the violation of the country’s stringent laws against insults aimed at its monarchy.

It noted that last week, the number two film at Thai box offices was Khun Tongdaeng: The Inspirations, an animated picture inspired by a book King Bhumibol wrote in 2002 about his pet.

According to the AFP, Thailand has one of the world's harshest royal defamation laws.
Anyone convicted of insulting the revered but ailing 88-year-old King Bhumibol Adulyadej, or the queen, heir or regent can face up to 15 years in jail on each count.

On Wednesday, reports emerged that a Thai woman will spend more than nine years in prison for defaming the monarchy.

A Thai military court sentenced Chayapa Shokpornbudsri, 49, to 19 years in prison aftershe pleaded guilty for “threatening state security and violations of the computer crimes act” through her Facebook posts.

According to the AFP, even the United States ambassador faces a police investigation for royal defamation over a speech last month in which he expressed concern at the lengthy sentences.
Bhumibol, the world s longest-serving monarch, is seen as a unifying figure in the deeply divided nation and his economic and social teachings are relentlessly promoted in Thailand.

Over the last decade the dog, an adopted stray, which is praised for her loyalty and obedience, has been used to outline his vision of how Thais should behave.
Posted by dubem naija blog at 11:19 am