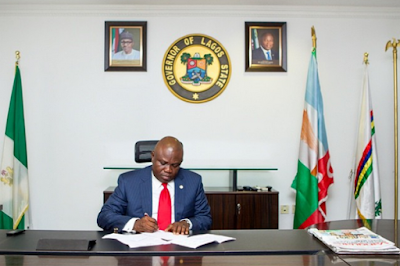 Governor of Lagos State, Akinwunmi Ambode, on Thursday presented the year 2016 budget proposal of N665.588billion to the House of Assembly. Upon presenting the budget, Ambode pledged that his administration would not only implement the budget faithfully, but also ensure that it worked in the best interest of people in Lagos, Premium Times reports.

The governor has named the budget “The Peoples Budget”, and emphasized that it has  increased by 26 percent over the budgets of 2014 and 2015 respectively which stood at N489.6 Billion respectively.

“The increase will enable our government to focus on the present challenges of security, traffic gridlock resolution including physical and social infrastructural development which has thrown up new challenges quite different from what we used to experience and have always known,” he said.

The report further states:
Giving a breakdown of the budget figures, Governor Ambode put the recurrent expenditure at N278,909bn while capital expenditure stands at N383,678bn, explaining that the capital to recurrent ratio is 58:42 as against 51:49 in 2014 and 2015.

Governor Ambode also put the total revenue estimate for 2016 fiscal year at N542.873Billion, saying the balance of N119.714billion would be funded through deficit financing constituting 0.41 percent of the state GDP, based on 2016 budget alone and a cumulative debt to GDP ratio of about three percent.
Posted by dubem naija blog at 5:41 pm