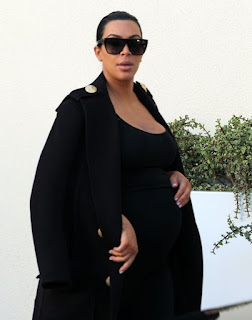 Kim Kardashian West is already thinking about having another baby with her husband Kanye West.
The Keeping Up With the Kardashians star, 35, only gave birth to their second child on Saturday morning but she's desperate to complete her brood sooner rather than later.

Speaking to her mother Kris Jenner during their E! reality TV show, the brunette beauty said: "I'm not worried about after giving birth to my second child, I'm just worried about number three, that's when your body really starts to slip."

Clearly shocked by Kim's random outburst, Kris, 60, snapped back, "Number three? Whoa! Can we just slow down and have number two?"

Kim underwent a medical procedure in a bid to turn her breech baby to the head-down position before giving birth three weeks early.

But, while the procedure was a success and the tiny tot was engaged, the beauty admitted it was extremely painful.
Posted by dubem naija blog at 5:05 am