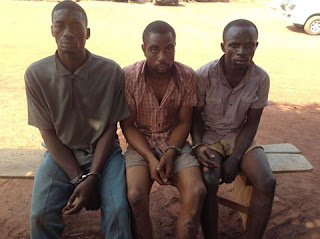 The Enugu state police command through its operatives of the Anti Kidnap Unit, recently trailed and arrested three notorious suspected kidnappers at their various hideout in Lagos and 9thmile Enugu state. Gruesome picture of the decomposing corpse after the cut... 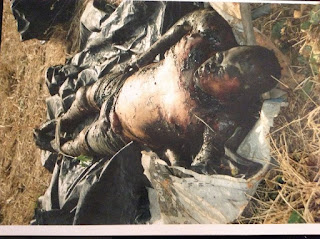 It was gathered that the suspects identified as Ekene Nwankwo, Emeka Igwe, Chidi Agu had allegedly conspired together with one Ebuka to abduct their victim at gunpoint. The victim who is now deceased and identified as one Ekene Okonkwo -was returning from a traditional marriage in his vehicle when he was abducted and taken to a nearby bush by old Nsukka Abor Road 9thmile corner Enugu where the suspects allegedly tied his hands and legs with rope and demanded for the sum of ten million naira ransom from the victim's relations.

The suspects also denied him food and water for seven days after beating him while in captivity.It was further gathered that this however made him to be weak and as a result died inside the bush. Suspects who were with the victim on noticing that their victim has died,abandoned the corpse and fled to an unknown.

Operatives of the Anti Kidnapping Unit of the command in their investigations launched attack on suspects at their hideout in 9thmile and Lagos respectively which left suspects fatally injured during a shoot out that ensued.

Meanwhile, full scale investigations have been intensified into the incident just as the dead body of the victim has been recovered inside the bush by the operatives and deposited at the nearby hospital for necessary action.
Posted by dubem naija blog at 2:11 pm