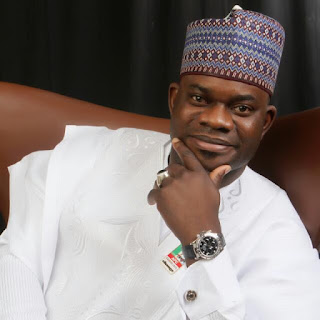 The Independent National Electoral Commission has declared the candidate of the All Progressives Congress, Alh. Yahaya Bello as the winner of the Kogi governorship poll. APC polled 247,752 votes to defeat PDP who came a strong second with 204,877 votes. In today’s supplementary poll, APC polled 6885 votes to beat PDP which polled 5363 votes.
Declaring the results in Lokoja, the Chief Returning Officer for the election, Prof. Emmanuel Kucha, who is the Vice Chancellor of the Federal University of Agriculture, Makurdi, said having fulfilled all legal requirements, Alh. Yahaya Bello is declared winner of the election and Kogi Governor-Elect.
Kucha declared: “That Yahaya Bello, having polled the highest number of votes and satisfied the law is hereby returned elected”.

The collation of results was temporarily paused when an unidentified agent of the PDP asked about the status of APC running mate. But the Resident Electoral Commissioner said Faleke remains the running mate to Alh. Yahaya Bello. The supplementary poll took place in 18 of the 21 Local Government Areas in the state.

Immediately the results were announced, the streets of Lokoja, Kotonkarfe and Okene erupted in jubilation as people poured into the streets in hundreds to celebrate the victory.

At Isanlu, Bello Support Organization said it is victory for democracy.
Posted by dubem naija blog at 6:31 am