How Dokpesi was Shielded when he arrived Kuje Prison 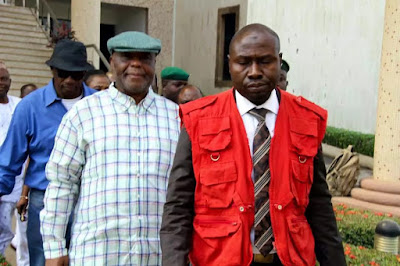 Justice Gabriel Kolawole had granted the media mogul bail. The conditions for bail are N200 million each (N400m) by two sureties and the judge ordered that he should be remanded in Kuje prisons pending the fulfillment of his bail conditions.

The Nation reports that Dokpesi arrived at the prison at about 4.55pm and was taken immediately to the prison chief’s office.

A source who spoke on condition of anonymity said: “We have received Dokpesi in Kuje Prison and perfected his records before allocating him a cell.

“Upon sighting Dokpesi, most of the inmates who were abreast of the ongoing anti-corruption trials, were anxious to see him.

“But we decided to keep him in the office of the Officer-In-Charge to avoid being hurt by some inmates. Warders succeeded in shielding him from inmates.”

According to the source, the media mogul was moody when he was brought in.

Dokpesi is standing trial for a six-count charge of money laundering and other fraud related charges.

He is alleged to have received about N2.1billion from the office of the National Security Adviser for the Peoples Democratic Party’s ‎presidential media campaign.‎